The very existence of Lake Chad is currently under threat, and this may soon endanger us. How is it possible?

Lake Chad is the fourth largest water basin in Africa; the economy of the whole Sahel region – that is the life and economic development of more than thirty million people – is dependent on water reserves of Lake Chad. In the last fifty years or so, the lake has considerably shrunk, and its extension is now less than one tenth than it was in the Sixties. This drying-up process risks creating a cataclysm in ecological and human terms, as well as an economic and geopolitical crisis which will concern a very wide area and will have a consistent impact on migration flows to Europe.

What kind of interventions and measures have been envisaged to save Lake Chad?

What we need is to increase water resources. It could be possible, for example, to revitalize Lake Chad by diverting waters from rivers which are tributaries to the Congo River, or by a more comprehensive inter-basin water transfer project. But these are very complex interventions and they have to be done with great discernment and the utmost care and caution. Furthermore, part of the land area which appeared as a consequence of the shrinking of the lake is rich and fertile soil, and submerging it without discrimination would be an issue for the life of people there.

What aspects of the water question in Lake Chad Basin will be dealt with during the event that CNR is organizing for Expo 2105?

The event will mainly deal with the potentialities and processes of international cooperation to resolve a critical situation such as the drying-up of Lake Chad. It will also pay special attention to the actual and possible contribution of Italy to the international cooperation process and the realization of operational projects concerning the revitalization of Lake Chad.

Do you see chances of success in this question of revitalizing Lake Chad?

I think there could be some progress in the way towards the solution of this big problem. Cooperation and agreement between the countries surrounding the Lake (Chad, Cameroon, Niger, and Nigeria) is obviously crucial. In this sense, the existence and functioning of the Lake Chad Basin Commission is a positive starting point, but the Commission could be more active in facilitating an actual cooperation between the countries concerned in view of realizing the revitalization of Lake Chad, in order to have more availability of permanent water resources for people living in the Basin, to improve fishing and agriculture (without living this to the questionable practice of land grabbing), and also to stop the alteration and decline of the ecosystem in the region. But the European States and Institutions should also play a crucial role in this scenario. It is indeed an European interest to prevent the growing impoverishment of peoples living in the region of Lake Chad Basin and Sahel; and it is an European interest to prevent the danger that the interaction of fragility factors, such as poverty, may arouse new conflicts in that area, or favor the development of extreme and terroristic Islamist organizations (such as Boko Haram), and threaten the international peace. 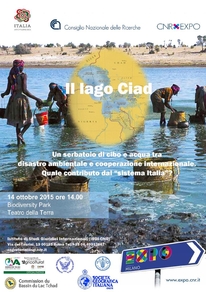