What type of event will be presented at EXPO?

It will be a scientific – informative event, aimed at informing the public on the existence of alternative food sources that could not so much replace traditional foods  but going to integrate them, in view of the growth in world population and the need to reduce malnutrition. We will bring with us also a chef and a nutritionist, who will explain how to utilize these innovative raw materials to cook new dishes containing ingredients that have very high nutritional properties.

What type of alternative food sources do you have in mind?

At EXPO we will be presenting as foods three new typologies of ingredients: microalgae, insects, and jellyfish [medusas].

It’s simply a question of culture, and we know that culture progresses…and that the culture of  nutrition develops rapidly. In any case, finding alternative solutions will soon be an absolute necessity: food resources are running out, while the world’s population continues to grow and needs to be fed.

So in the near future we really will be eating microalgae, insects, and jellyfish?

In reality we will continue to eat the same things, at least apparently. These foods will serve as  ingredients that are capable of boosting our diet from a nutritional – in particular, protein-related   –  point of view.  For example, microalgae have been used for centuries for human nutrition in the Asia, in Mexico and in Africa. In particular Spirulina, which is currently sold on the market as a food  supplement, has important nutritive properties with a protein, vitamin  and mineral content, in higher proportions to those of traditional foods. Suffice to say, that one hundred grams of microalgae contain at least sixty  grams of protein, a percentage that is not found either in meat or in other vegetable sources. Spirulina produced in highly controllable conditions could be an interesting ingredient for realizing dairy products, baked goods, and pasta. Tagliatelle [noodles] made with Spirulina already exist; it can also be used to make bread, and even ice cream, yogurt, and milk shakes. In practice it can be used as an ingredient in order to ‘fortify’ commonly-used foods, in particular to the benefit of several categories of persons, such as the elderly, who are typically lacking in iron of which Spirulina abounds, as well as athletes and vegans. In less prosperous countries, the exceptional protein content of Spirulina could provide a balanced diet and reduce malnutrition, especially in children.

And jellyfish? We already have an abundance of these in the Mediterranean…

Yes, jellyfish are a terrible nuisance for our seas and for tourism, and the thought of eating them may seem strange. However, several species of jellyfish are traditional and appreciated foods in the diet of many Asian countries, among which China and Japan. For example, in the form of Sushi. Various species are edible, and what remains after the stinging part has been removed, has  a high water, protein, and collagen content, which confers them nutraceutical and health properties beyond their nutritional properties. Collagen is a valuable protein present in all animal tissues, and abounds in special amino acids with anti-oxidant properties, very useful for the cosmetic and pharmaceutical industry. In Asian cooking, edible jellyfish are collected and deprived of the stinging part, then -like fish-  can be cooked with sauces and spices, or fried (tempura), or  preserved by  means salting and drying.

Are insects also rich in protein? How will we go about getting used to swallowing worms, crickets and locusts

Insects are a part of the daily diet of millions of people in many countries, both in Asia and in African and Latin America.  Due to our eating  culture will be very hard to introduce them entirely in our food. And yet they are very rich in protein and in mineral salts, and this valuable nutrient composition has led our researchers to try to use them to produce different types of flour. To our way of thinking, it is easier to eat a muffin made with insect flour, rather than a handful of fried crickets. Insect flour has all the properties needed to be used both for our diet and also for the feeding of livestock, with a two-fold advantage: it is very nutritious and represents a protein source alternative to fishmeal, which will become always more costly because of the over- fishing of the seas.

If the matter of their taste is not a problem…what are we waiting for?

The entry on the market of novel food is regulated by European Law N° 258 of 1997, which is currently being revised. This law imposes very burdensome procedural times and costs, ones which we are trying to have reformed. It is clear that, in order to introduce new foods on the market, both their nutritional quality and microbiological and chemical safety must be guaranteed. In any case, we must first try to avoid a “do-it-yourself” approach, and then proceed to industrialise the production and transformation processes. 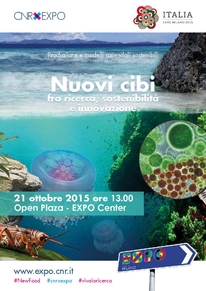