Changes in climate, population growth, urbanization, economic development and land use are projected to cause water security issues in all countries and continents, with increased competition for scarce water resources, constraints on socio-economic development and inequality of access to water resources. With agriculture as major water using sector (ca. 70% worldwide) and projections for 2050 when 60% of extra food will need to be produced to feed a population of 9 -10 billion people, water will become more and more key to food security.

Water crises might be among the major global risks to social stability that the world are the least prepared for. Mitigating risks to long-term water security requires designing resilience strategies and solutions going beyond sectoral divides and matching the needs of water from different users in a region. Governance of interconnected solutions is then at the core of the Water-Food-Energy-Ecosystem Nexus. Managing the Nexus requires solutions focusing on equitable allocation of water across all economic sectors including an appropriate appreciation of the role of ecosystems as elements of the capital assets that support the water sector. As integration is not a new concept in water management, how do we make a difference in integrating approaches by adopting a Water Nexus perspective?

The workshop, organised by the CNR-Consiglio Nazionale delle Ricerche, the JRC-Joint Research Centre of the European Commission, the FAO-Food and Agriculture Organization, and UNESCO-United Nations Educational, Scientific and Cultural Organization, will address interconnected solutions for a Nexus governance of water resources. It will be organised in two steps. The first day will have a scientific focus. This scientific event will be followed by a shorter event for the general public and the press where the main outputs of the meeting will be streamlined and released to policy-makers and stakeholders.

The workshop is planned to complement numerous specific events covering the problem of water scarcity for agriculture and the humanity at EXPO (spanning June 2015 in the EU and Italian pavilions, hence the selected date and locations). The event will help raise awareness and increase knowledge with the aim of implementing best sustainable practices when dealing with the problem of water, food and energy. The event will bring together participants from Europe and beyond, including components from science, industry, policy and the civil society.

The first day of the workshop will feature four sessions:

The format adopted will include a few lectures released by key speakers who lead the fields. At the end of each lecture, a panel featuring prominent personalities from social and political fields will highlight possible consequences and interactions of the proposed approach on the Nexus, and overall benefits/costs of presented innovations at local, regional and global level. The debate will follow up with participation of the entire audience, also through streaming, via twitters or other media.

The second day an event for the general public and the press will be held at the EU Pavilion at the EXPO site. Moderated by a renowned scientific communicator, key participants of the previous day event will release an overview of the problem as analysed from the Nexus viewpoint and a series of testable best practices and recommendations, to lead policies toward sustainable use of water for food and energy production and for ecosystem stability. The conclusions will be debated with the public and will be collected in an opinion paper to be released to stakeholders and the scientific community.

Venue of the Workshop

The first day, the Workshop will take place in the Sala Convegni of the CNR Research Area MI1, which is located in Via Alfonso Corti 12, Milano, in the so called area “Città Studi". The event of the second day will take place at the EU Pavilion at EXPO. No registration fee is foreseen for participation in the 2-day event, and the European Commission will offer the entrance ticket to the EXPO site on 19th September 2015. A confirmation will be sent to participants at the latest by 8th September 2015. 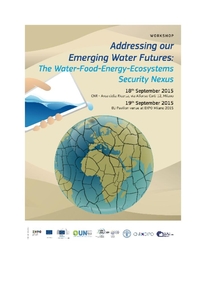