Coordinator: Giorgio Matteucci
Institute for Agricultural and Forestry Systems in the Mediterranean (ISAFOM)

What the event you are organising at EXPO is about?

We will bring together, for the first time, the LTER Italia network with its long-term research sites, run by many scientific institutions, Universities and agencies, and the LifeWatch european infrastructure that has one of the three centralised structures, the Service Center, hosted by Italy. We want to present to the public these two entities, together with the services that they can offer to citizens.

It is the network that study and monitor the status and trends of many important ecosystem in Italy, investigating the impact of climate change and pollution and evaluating the possible loss or alteration of their biodiversity. The network includes long-term research sites in forests, high elevation environments, lakes, coastal, marine and transitional water sites. In these sites, ecological observation are going on sicne 10 to 20 years in average, but with cases in which series date as far as 80-100 years ago.

Are there relevant sites in Italy?

The LTER-Italia network is currently composed by 25 parent sites, with more than 70 research stations where long-term ecological researches are performed. While in other countries the focus is particularly on terrestrial sites, the Italian network is multi-domain, comprising sites in terrestrial, marine and lake ecosystems. Our network includes also the two CNR research stations in Antarctica and on Mount Everest.

Lifewatch is an e-infrastructure, a virtual infrastructure that provide ICT tools and services for management and advanced elaboration of biodiversity data to researchers, public and private stakeholders working in the field of green e blue economy.

LTER investigates biodiversity and ecosystems, analysing their evolution, water quality, the impact of pollution and climate change and resource availability. Some LTER sites are in marine areas and have relevance also for fishery, while others are in forest ecosystems providing information on wood and other primary resources. LifeWatch works on making available biodiversity data and providing discovery and elaboration services to researchers and environmental resource managers.

In practice, how CNR will be involved in LTER and Lifewatch in the EXPO year?

Further to the technical-scientific involvment of CNR in LTER Italia and LifeWatch, on the inspiration of the “pilgrims paths”, such as that of “Via Francigena”, we are organising together with other local and LTER partners some “paths” on ecosystem research. In Italy we have more than 70 sites and we are looking for paths to be done on foot or by bicycle that can be proposed to citizens. Apart being an opportunity of eco-tourism, these paths will be a chance to explore our country with its ecological values and fragilities and to participate to citizen-science and environmental analysis initiatives and projects.

What is the citizen science?

It is one of the modalities of 2.0 Science, a way to make the research widespread with the involvment of professionals but also normal citizens, that will be called to make observations or measurements.

Are you planning to prepare a guide for these paths?

At EXPO, on July 29th, 2015, we will present the paths that will be ready. At the moment of this interview, there will be surely three paths. The first will be a bike tour fron Adriatic coast in Molise to the Gulf of Naples – that will be realised for the first time from June 29th and July 7th, 2015, while the other two are planned on foot, one from Mount Velino to Gran Sasso that will start exactly on July 29th, and the third from Mosso Scientific Institute on Monte Rosa to Lake Maggiore, planned for end of August 2015. The road to arrive to put together the technical-scientific with the extension-touristic approach is not simple, but we will pursue it. 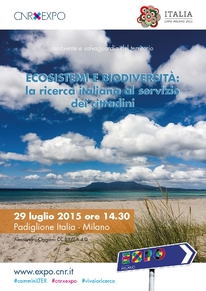