Plants and humans move, change places, migrate driven by often common forces and motivations. The first and oldest factors are the climatic ones. Glaciations made the plants go backward, driven by advancing ice to seek warmer climates for their habitat, and then return to higher latitudes when the weather allowed it. For example, during the long Quaternary glaciations European forests were considerably more restricted compared to the present interglacial state: the Mediterranean in the south and the unfit environment in the North, restrained the temperate area only to Iberian, Italian and Balkan peninsulas. Many trees were confined in small sites in the Mediterranean area to the borders with the cold steppes and tundra of Central and Eastern Europe. Changing climatic conditions the plants have started to move, to migrate even if with long times and slow movements. This happened millions of years ago. Coming to historical periods close to us the movements of plants bind strongly to people and get hectic. The cultural, economic and social Map of human migration overlaps and overwrites that of plants: plants traveling with people bring environments and habits, food and wealth. Some social and cultural hubs of migration will be mapped and presented: Arab culture in Europe that brings unknown plants moving from Sicily, and the joint migration of plants and people from the Americas and Africa. Evidences relating to the movement of plants and food will enrich the expert presentations with tangible examples. The last frontier of human migration, the Space, closes the circle: the Volkov’s tomato and Japanese astronaut Furukawa’s cucumber, were grown on the International Space Station. 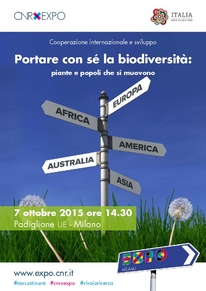