Desertification is caused by a combination of factors that promote the persistent degradation of ecosystems in arid, semi-arid and dry sub-humid regions. Climatic variability and climate change are certainly major factors, but desertification is above all caused by human activities. There is a West African proverb that says “Forests precede civilizations and deserts follow them”. I believe that this essentially characterises the situation that is occurring in some parts of the world, such as the Sahel.

What is the link between desertification and climate change?

Paradoxically, it would be possible to mitigate climate change if we were able to change our energy policy in time. Whereas, desertification would not be stopped, because it is largely linked to poor land management and unsustainable use of resources. However, it is important to underline that significant reduction in rainfall, especially in the summer, and increases in temperatures between 4 and 6 degrees are predicted in the Mediterranean basin by the end of this century. The combination of these two factors will generate strong aridity that will likely exacerbate the desertification process.

What are the major risks?

Some scientists have begun to fear that the combination of more frequent heatwaves and extended megadroughts could exceed the point of no return in few years in terms of their effect on climate, agriculture and ecosystems. In areas where this runaway global warming may happen, we will no longer talk about desertification, but Dust bowlification. Compared to desertification, dust bowlification is a different concept altogether; even in the most extreme conditions deserts are still ecosystems: for example, arid areas include 20% of the centers of biodiversity and 30% of the endemic birds of the globe. If we cross the climate tipping point, we may not even have deserts, but end up with ... bowl of dust.

How can we combat desertification?

This is one of the big questions facing society today. There are no easy answers. Isolated interventions are often useless because desertification is caused by a combination of natural and anthropogenic (political, social, and economic) factors that vary over space and time, and are aggravated by global warming. To restore the sustainability of drylands ecosystem services, a systemic approach is required at both the local and global levels. We must restore the ecological balance in drylands, i.e., dryland functioning and resilience.

What is the time horizon before the process becomes irrecoverable?

The problems of runaway global warming and land degradation do not concern the Earth but humans: These issues are important for the effects that they will have on the humanity and not on the planet, because over a time scale of centuries the Earth over will gradually reach a new equilibrium. But what will the effects on the humanity be if an important part of the planet is affected by desertification? The time available to address these issues is in any case very limited, and Mediterranean countries are the most fragile globally. This is not only because of their ecological balance, but also because of anthropic factors. The migration flows that we are currently witnessing are just an example. Many of the people who come to Europe do not run away from war, but from territories rendered inhospitable and uninhabitable by land degradation. In a nutshell, they are environmental refugees. And their number is expected to grow exponentially in the years to come.

What lands and areas are affected by desertfication?

Arid areas prone to desertification occupy about 41% of the Earth's surface and are home to more than 2 billion people. About 72% of drylands occur in developing countries, thus the correlation between poverty and aridity appears to be quite clear. With regard to Italy, the latest reports tell us that about 21% of the country is at risk of desertification, and approximately 41% of the affected area is located in the South of the country. These are significant figure that describe a problem that is becoming increasingly concerning but of which public awareness is largely unaware. In Sicily areas of land prone to desertification have risen to 70%, in Puglia 57%, 58% in Molise, 55% in Basilicata, while in Sardinia, Marche, Emilia Romagna, Umbria, Abruzzo and Campania are between 30 and 50%. In general, about 32.5% of Italian territory is at a high risk of desertification, 20% has a low sensitivity, whereas only 6% of the country will be unaffected by this problem.

It will be a workshop, a debate between research and policy communities, diverse stakeholders and the general public. At Expo we will provide a platform for scientists and policy makers to interact, to analyze the situation and develop workable solutions to address the challenges that we will face in the future and ameliorate the negative impacts of increased aridity and land degradation: the deserts are getting closer to the center of Mediterranean Europe, but almost no one talks about it. 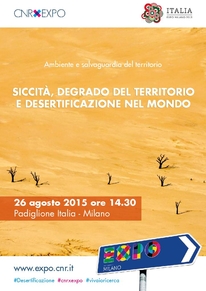