Home > Events > Obesity: when, how and why. The causes, effects and ways to counter it
Date:
20 May, 2015
Location:
Conference Centre - Expo Milano
Format:
Conference
Thematic areas:
Food and human being
Education

Which kind of event is that organized for EXPO’?

How do you define obesity?

The diagnosis of obesity is based on Body Mass Index (BMI) that is obtained by dividing the weight (in Kg) by the square of the height (in m). If BMI is greater than 30, the subject is considered obese, between 25 and 30, she/he is considered overweight, if it is between 20 and 25 we talk about a normal weight subject;  below 20 subjects are considered underweight. BMI is a rough estimation of obesity, but it is very commonly used  since it is easy to calculate and it is widely adopted in large cohort studies.

How big is the problem?

To address this issue we will give a look at the most recent data on obesity worldwide. Obesity soars to alarming levels in developed as well as developing countries : over 2 billions people, accounting for 39% of the human adult population are overweight or obese. Even more concerning is that 42 million children below 5 years of age are obese. From a 2013 survey 33% of the adult Italian population can be considered overweight/obese; the southern  part of the country is more affected by the phenomenon with a peak in the Campania region. Striking and significant is also the different prevalence of obesity within the social classes: poor and less educated people are far more affected by this condition.  Healthy food is more expensive and the concept of physical activity as an healthy habit is less popular  within the less wealthy levels of society .

For the first time in the year 2000 the overweight/obese population exceeded that of  the undernourished people.  With a very low incidence obesity has always existed, often related to endocrine dysfunctions, but its perception as a public health problem has started only in the ‘50s of the last century, when, following studies that pointed to obesity as a cause of a major risk for cardiovascular diseases, the American Insurance Companies  introduced the body weight parameter as a risk factor in their Insurances.

Has the human being ever been obese before the present age?

Members of the human lineage, as well as all other animals, had been living on hunting and gathering for about 2 millions of years: in a subsistence economy overeating was not an issue and this was the context that shaped Homo sapiens biology. In the recent decades industrialization has made available high calorie food at low cost. Human metabolism was not ready to  counteract such a sudden change:   the  excess of energy stores becomes then accumulated as fat.

The last 3 human generations had then to face obesity along with its comorbidities.

Why do we get fat?

It happens when the energy balance is different from zero. For the weight to remain stable calories intake must equal energy expenditure. If we assume more calories we gain weight.

What are the mechanisms underlying body weight regulation?

Energy balance, body weight regulation, our perception of satiety or hunger are the result of a continuous cross talk between our brain and peripheral organs. A major role in this dialogue is played by the adipose tissue, more popularly known as fat, which in the last 2 decades has emerged as a true endocrine organ, due to its capacity to produce hormones and circulating factors that act as determinant regulators of our energy balance as well as of several other vital functions.    Among substances produced by fat it is important to remember leptin that informs the center about the status of the energy stores. The brain, in turn elaborates this information giving rise to our sensations of hunger or satiety. This system, meant to keep body weight constant, seems to be impaired in the obese subjects.

Nowadays we have advanced technologies able to map our body: these include DEXA, a scanning apparatus that uses two low-level X-ray beams to develop estimates of fat-free mass, fat mass, and bone mineral density.  Bod Pod, on the other hand, makes up a person's total body density using Archimedes' Principle of displacement: it is a very precise and accurate radiation free method that can be safely used also in children. Differences in fat distribution are determinants for the obesity associated risk factors. Central obesity is the most dangerous, being more frequently associated with diabetes and cardiovascular diseases.

For those who work in the biomedical field it is not an esthetic problem, even if self-image may cause serious psychological problems in obese subjects. From our perspective it is mainly a medical issue and a multi-systemic disorder. Over 40% of the risk to develop non insulin dependent diabetes depends on the presence of obesity.  Other consequences are fatty liver, atherosclerosis, stroke, heart failure, the incidence of some types of cancer, joints problems that in the long term may greatly impair the mobility of the subject. 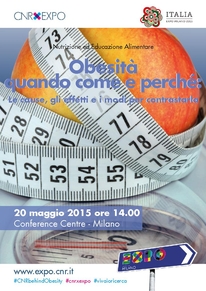