How would you describe the event you are organising in EXPO?

It is devoted to wheat research, but it will deal with themes that go far beyond the specific features of this crop.  A small number of crops produce a large fraction of the harvested calories and proteins and research on these crops will be crucial to guarantee that we will be able to meet the increasing demand for food and feed. We will present the main challenges that agriculture will have to face in the coming years, and identify areas where further research is urgently needed.

Are we so dependent on a limited number of crops?

A few major species will continue playing an essential role in agriculture. For instance, rice, wheat and maize produce  about two thirds of harvested calories. It is clear that our food security will largely depend on the progress we will be able to make in these and few other major crops.

Can you provide some figures?

In the 1985-2005 period we have seen a 28% increase in agricultural production. The increase in cultivate land areas has contributed marginally (less than 3%), while more intense use of land (7%) and yield increase (more than 18%) have given the most important contribution. It is therefore clear that a major role has been played by genetic improvements of major crops. However, yields are increasing too slowly (1-1.5% per year) to match increasing demand of agricultural products for food, feed and industrial uses.  We will need to nearly double agricultural production by 2050, which means that we will have to increase the production by 2.4% every year.

How can we feed 9 million people, the expected population of the planet in 2050?

We will have to use all available tools, including those provided by genetic improvement. It has been estimated that up to 70% of yield increases are due to genetic improvement. We will need varieties that produce more also in face al climate changes. For instance, wheat yields are stagnating in different parts of Europe, and this has been ascribed to temperature increase. For wheat, demand is expected to increase by 60% in 2050, and this will require increasing yield every year by 1.6%. This rate of increase is considerably higher than the current one.

Which tools can be used for the genetic improvement of wheat?

We expect genomics to play an important role. A series of scientific articles published last July describe the genomic sequence of bread wheat. The data obtained during the development of this project, and the functional characterization of the genes, will allow to speed up the genetic improvement of this crop.   The availability of the genomic sequence also paves the way to the exploitation of wheat biodiversity.

And what is next?

Can you briefly describe how crops are genetically improved?

The first step is to look for variability within the species. When this is not sufficient, new variability can be created. An important role will be played by seed banks which will be exploited also using the new tools provided by omic technologies. For instance, the Global Plant Council is leading an international initiative to produce digital seed banks, which will contain genomic, proteomic and  metabolomic data for each single seed stock present in the bank. Finding the right plant bearing the right characteristic will become much easier, facilitating the work of breeders.

Which are the traits of interest in the case of wheat?

We must increase yield, but also certainly have to reduce the environmental impact of agriculture. We should produce more using less resources, but also improve the nutritional and technological properties of wheat. New wheat varieties with high fiber or reduced impact toward consumers which are allergic to wheat, or are affected by celiac disease, are some of the goals. Given that almost seven hundred million tons of wheat are produced worldwide every year, even minor gains can have a tremendous impact. 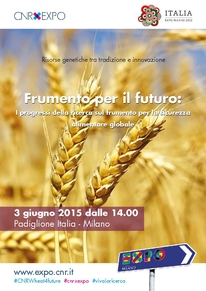 From Seed to Pasta