Why you chose apple to represent Italian Fruit?

Apple is the worldwide best known and appreciated fruit. Yet, Italy has a peculiar excellent apple production, Italian apple may offer a wide range of taste and flavor experiences. We can talk about  a generic “apple”,  but apple world is extremely rich and variegated! Fruit provide essential nutritional elements, essential for health, a multi-portion daily consumption could help prevent major diseases. However, health is often not sufficient as a driver to encourage  fruit consumption, especially when a fruit is perceived as banal and antiquated. High quality, food emotions and innovation should help in motivating consumption.  Research work on improving fruit flavor and nutritional features should be better communicated. The apple is the natural ancestor of the trendy  “functional food” of the present,  and possibly is also the future…if we will be able to fulfill consumer expectations.

What kind of event are you planning for EXPO?

The proposal asks scientist from different disciplines to approach fruit through oral and filmed presentations, to introduce the audience to experiences on apple sensory appeal, not only visually but through touch, smell, taste…and hearing (crispness of a fresh apple is a real pleasure!). Apple is connected with food history. Our scientific trip will start with the studies of E. Visalberghi, on food approach by our forefathers Primates. The vital contribution from anthropology will be presented by M. Niola, while R. Volpe SPP-CNR will explore health issues. The variety of different apples that through the centuries has arrived to our tables will be also discussed. Human perception and present technology to support quality excellence and consumer satisfaction will be presented by experts in aromatic compounds e.g. those responsible of fruity, floral, herbal notes (F.Biasioli), electronic noses (G.Sberveglieri), and food safety and innovation (V. Sberveglieri). The short but intense edutaining journey has the aim to explore apple world as an icon of food culture, were a consumer can find hedonic satisfaction, while scientist plan a future where healthy and tasty fruit will reinforce tradition and contribute to wellness.

How would you begin a narrative introduction to this meeting?

Of course with “Once upon a time… there was only one apple: it was small, green, not so sweet. But this first, poor apple was good enough to be appreciated,  treasured and grow, to give origin to hundreds of different delightful apples. Each of them exalting traits of sweetness, aroma, crunchiness, freshness.

What do we know about that first apple?

In reality is impossible to know which apple was eat first among the more than 50 original apple species, a candidate is Malus orientalis wild apple from central Asia. To mix one more time science and culture: these ancestral-like apple trees can be found in countries which surround the Mount Ararat region, where the biblical account indicate the resting place for Noah’s Ark.  Traces of apple have been found in archaeological sites dating back to the Neolithic belonging to the species M. sylvestris small tree or shrub we can still find in nature, with thorny branches and small, hard, astringent fruits, poor in flesh with plenty of seeds. Presumably apple trees started growing around habitations from discarded apple pips. While the earliest evidence of apple domestication dates back to the 10th Century BC from a site in Israel. Through the centuries, with human careful selection and growing horticultural skills, apple have improved. Grafting of apple varieties is reported in Greece around 300 BC. Ancient Romans considered apple a luxurious fruit, Catone, Columella and Plinio il Vecchio describe about twenty cultivars. During the Middle Ages, apple varieties were produced in monasteries, in subsequent centuries nobles and rich people cultivated numerous varieties, leaving us detailed visual list in beautiful still life paintings.

How many apple varieties exist?

Thousands! The principal being hundreds. And research is continually selecting new cultivars with improved traits, providing low allergenic apples, fruit suitable for diabetics and also studying ancient  cultivars to find natural sources of resistance to actual fruit diseases. The most popular cultivar is the green-yellow, aromatic  Golden Delicious, while  great visual appeal have red apples, including its sport Red Deliciuos  and many other providing a wide range of taste experiences. Research on sensory traits has explored and improved traits related to aroma, juiciness and texture. Sweet apple lovers can rely on the numerous clones of Fuji originally selected in Japan. Who prefer acidic apples can find cultivars similar to the old Granny Smith (discovered in Australia around 1860).  As shown by the development of technology related to aromatic compounds, numerous new delightful apples find their key strength in  rich fragrance notes fruity, floral, herbal, tropical, even spicy.

In the Bible the apple is the first fruit eaten by Eve and Adam….

In the Christian tradition the fruit of the forbidden tree Adam and Eve ate is an apple. In the Book of Genesis the fruit is not identified, but which one is more popular than apple! In Latin you can find the words 'apple' ("mālum") and 'evil' ("malum") and think that apple was a good candidate to play the role of the “forbidden fruit'. Many more speculations can be done, but I think is better just leave the apple its emblematic lure, which proceeds through the golden apple Paris gives to Aphrodite, traditional fairy tales such as Snow White, up to William Tell bow, Isaac Newton law of gravity…up to New York “The Big Apple” symbol  of modernity…. My suggestion is to just taste our “apple- a-day” as if it was really “la prima mela”. 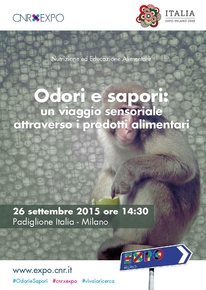 Introduction to Sensory Analysis: the taste of Apples