What kind of event will be organized in Expo’?
It will be a conference followed by a panel discussion, to be attended by EU experts, representatives of basic research, of companies, of Kyoto group.

Italy has a great tradition in the field of plastic, what's left?
We invented the plastic. To be precise Giulio Natta in 1954 invented one of the most widespread, polypropylene, and in 1963 he also won the Nobel. We also were the first to put it into production, with Montedison Company. And it is curious to note that just a company born in Montedison, Novamont, invented the plastic starch, one of the most promising bioplastics. There is a thread: it means that over time these excellent skills have not been lost.

Why packages are so important?
Packages are fundamental for the food chain, both in terms of food safety and for the ability to enhance the preservation of food while keeping the quality as long as possible. Today it is not only a means of containment and mechanical protection of the food but plays a more active role.

What else can do a package, out of protect food during transport?
For example, allows food sterilization, controlling the microbial growth that can come from an anticipated deterioration, contamination or incorrect manipulation. Nowadays, some food must be sterilized just prior to packaging, to control bacterial load, but once packed can no longer be manipulated. It 'a problem, typically for “ready-to-eat” products, like vegetables already washed and portioned.

What can be done when the product was packed?
The secret is in the type of polymer used for packaging. If this is made of plastic films resistant to radiation, the product can be treated when it is already closed, and at that point no more contact with microbes is likely to come. The commercial films currently available, however, when exposed to radiation (like gamma rays) can degrade. Film resistant and completely stable are needed, which are just beginning to make their appearance. The research is still in progress.

Speaking of research, in which direction are you?
A very interesting frontier is that of the active films. Such films, in the course of their use, release substances incorporated in the film itself, which are able to interact with the food, for example, allowing the maintenance of the organoleptic characteristics, or the slowing of the decay. Until now packages were thought such a impermeable cage. In contrast, substances can be encapsulated in some plastic films and, taking advantage of their intrinsic permeability, can be slowly released and enhance the preservation of food.

The packaging may help us choose the best foods?
The so called “smart” films can do it, thanks to the presence of substances that exhibit color changes related to the temperature or other phenomena. They can tell us, for example when the cold chain has been broken and therefore if a frozen food was thawed and then refrozen: the packaging will change color irreversibly.
Other films will signal the change in pH. Some foods, including mozzarella, when aging develop acidic substances. Their rancidity is thus connected with a lowering of the pH, that beyond a certain level indicates that the product is no longer edible. Also in this case the package will change color.

So, the future of packaging is already written?
The technologies that I mentioned so far have been developed for film of fossil origin, such as polyethylene (PE), polyethylene terephthalate (PET), polypropylene (PP) and polystyrene (PS). Today, however, environmental legislation favors those biodegradable, so the research is converting to biobased film, even if this means additional difficulties. 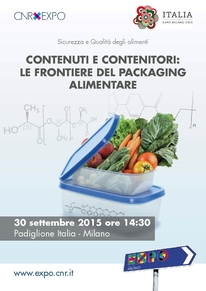